on your order + reward points + freebies

*Offer applicable only once per user

Square -1 is a WCA cube puzzle which was invented by Czechoslovakian designers,Karel Hršel and Vojtěch Kopský around 1990.

It consists of two layers with 8 corners and edges, and it is solved using slice moves.

It is quite popular for its shapeshifting abilities and it is the only WCA puzzle which shape shifts. A few years ago, square one wasn't a popular puzzle among cubers due to bad hardware and underdeveloped solving methods. All of this changed in the fall of 2015  when the Qiyi square one was released.

This square one was miles ahead of its competitors and had amazing performance. It was used to break tons and tons of records. Every cuber switched to it and eventually square one became one of the most popular events in WCA history with more than 2,00,000 active competitors.

Mofangge Qiyi was responsible for the leap in square one times, they made amazing products like the Qiyi square one and the volt square one which were used by top level speedcubers like Rasmus and David Epstein to push the limits for square one solving to higher levels.

Square one is one of the most complex puzzles. Unlike the traditional 3x3 cube, a square one shapeshifts and acquires a chaotic form on scrambling.

They are a great choice for all sorts of cubers. When a cuber solves a square one, his/her cognitive skills are put to test. This helps in development of problem solving skills and intuition.  It also improves concentration and overall thinking skills of a cuber that may help in developing new fingertricks which might be beneficial for other cubes too.

Square ones are one of the most fun to turn puzzles and come in various plastic colors.

They are a must have for every cuber's cube collection and you should definitely pick one up!

Other than Square-1 cube we have an exclusive collection of QiYi, MoYu, YJ, ShengShou, DaYan, MoFang JiaoShi, YuXin, and Robotime 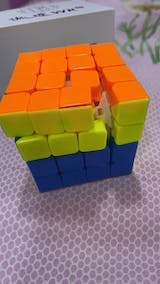